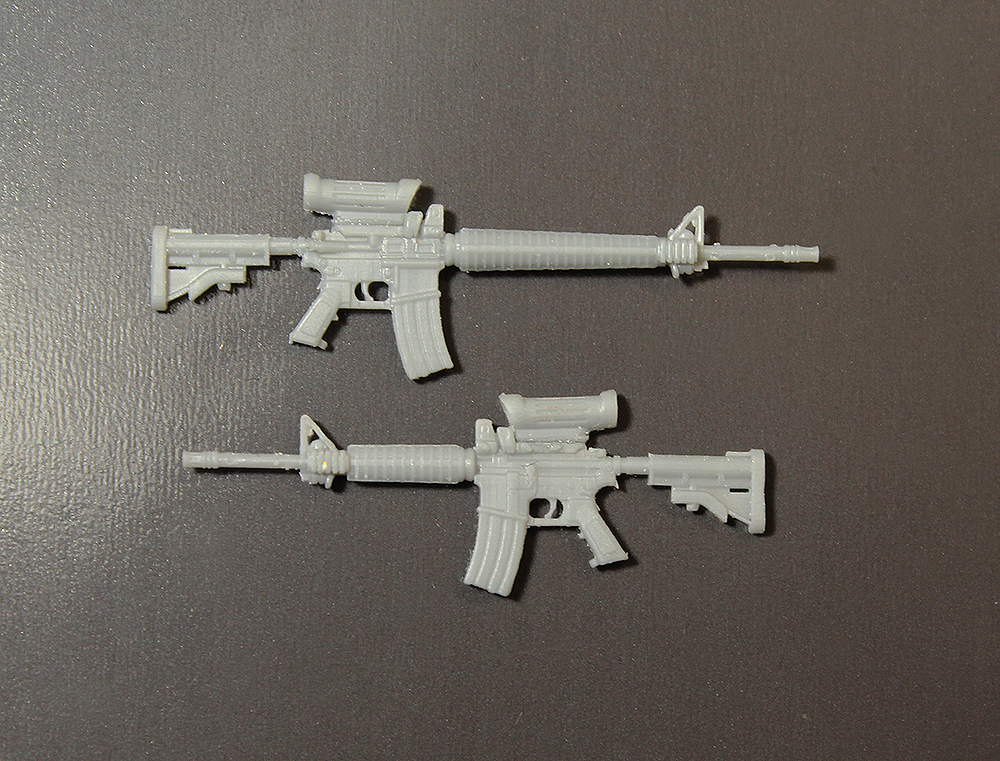 It’s been a while since a did a review per se, but recently I made a substantial order from a small Greek company called 3D MicroCosmos and I received it today. I figured it might be interesting to look at it more closely for the benefit of my modeling colleagues around the globe.

I became aware of this company through its Facebook presence. Like many other modelers, I was intrigued by their offering: mostly 1/35 small arms, but also a bunch of accessories seemingly focusing on Greek vehicles (Humvees, M113, mostly) and some diorama items like tools and containers.

When I saw that they were working on M16/M4 base weapons, I reached out to them to suggest they produce a C7A2 and a C8, and, to my delight, they promptly went about doing just that, created both, and, well, I had to order them. So I did that along with many more.

There are two ways to order if I’m not mistaken. Directly via Messenger from Facebook or via Hobby Market. I ordered my stuff through messenger, paid via Paypal, and got my things a few weeks later in a low-profile cardboard box.

What’s in the Box?

I had ordered a bunch of things, about twenty references in all (not all on the pic below). Everything came in small Ziplocs bags. For the most part, the parts were still on their supports. More importantly, there weren’t any damaged parts whatsoever, despite some very delicate parts such as barrels.

Now, this is where this gets interesting. As far as 3D printing goes, this stuff is top of the line. The prints are extremely crisps, printing resolution looks like it’s under 0.01mm, you really have to look closely to see any sort of layering. On my batch, I did not have any sort of warping or misalignment. The quality of the sculpts is also very, very good.

Evidently, these guys know 3D printing. The prints are not only clean like I said, but they’re also cleverly supported so that cleaning them is relatively easy.

You have to be careful, however. The nature of printing resin is such that once cured, the resin gets somewhat brittle, and if you try to clean the support too quickly, you can easily damage the parts (just like I did here, I was a little too enthusiastic and broke the left footplate of the M60’s bipod). Of course, it would be even cooler if the parts were already cleared away from their supports, but then I suppose the price would go up. Maybe they could offer customers to buy cleaned parts for a slightly higher price. I think I would rather buy that and spare myself the trouble.

Now, I don’t intend on taking detailed pictures of all I’ve bought, but the important point is that whatever MicroCosmos is showing on its page is pretty much what you get.

Oh, before you ask, they do NOT sell .stl for to print on your own. They sell the actual prints. After seeing the quality of those prints, I think it’s a sound proposition because I would peddle quite a bit to achieve this level of quality, I’m afraid.

In terms of accuracy, I haven’t challenged the parts, not yet anyway. I would say it looks pretty much spot on, but it would be interesting to take a good look at these offerings from an accuracy standpoint. For instance, the M4/M16 30-rounds magazine for their earlier M4 looks slightly off, but like I said, this is purely based on eyeball mk.1. The magazines of their M16A1 series (shown below) looks spot on.

Cons – No cons per see, but a simple word of caution about cleaning the parts. We do this all the time with styrene, so that’s no big deal, but I mention this because it’s not obvious when looking at their FB page and if you’ve never cleaned a 3D part, you need to be extra careful doing so.

Very highly recommended. I hope they keep going, so far it’s a very interesting little company that I am sure to keep following in the future.